Me and Whitevanwoman were very excited when we woke up this morning to find a good few inches of snow, enough to do some sledging. I pestered Whitevanwoman all morning whilst she did some jobs, and eventually after spending ages putting on lots of clothes, one layer on top of another, she said she was ready. I thought she looked like she had been eating too much and needed a smaller dinner bowl and her dinner ration reduced, but I didn’t say anything to her in case she had a grump and changed her mind about going sledging.

After digging my sledge out of the snow, and a rummage in the back of the white van for my husky harness, I was finally ready to go to work as a Sled Dog. It’s ages since we last got the sledge out and I was a little giddy with all the excitement, and kept forgetting that wherever I went, the sledge went too. But I soon got the hang of it again, especially after Whitevanwoman had weighted down the sledge with a couple of bricks, and I think my mate Emma who lives next door to us was pretty impressed as she came to her front door to watch and take some photos. 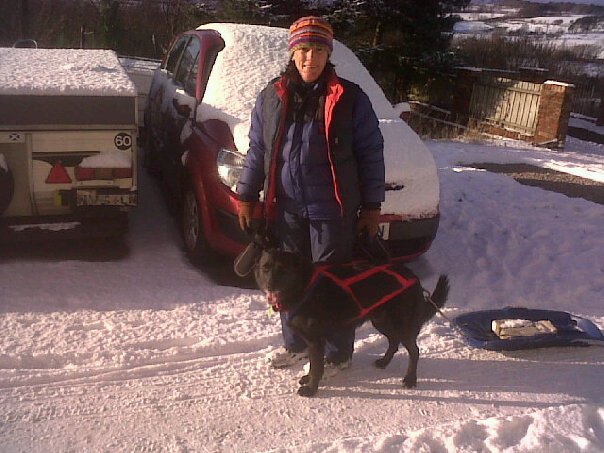 After several practice runs up and down in front of Balamory (where we live), I began to realise that Whitevanwoman was teaching me a new command “Pull”, and that I had to listen carefully to what she was telling me otherwise she would say “Ah!” which means “No” in dog language. So I soon figured out that she wanted me to go ahead of her and pull the sledge behind me (humans are SO contradictory – when we are out for a walk on the lead,  I am not allowed to walk ahead of her or pull on the lead). At first, I kept stopping every time I felt the harness pull on my shoulders but Whitevanwoman kept encouraging me to keep going so I did and soon I was good enough to venture further afield.

Whitevanwoman said that we were not ready yet to go up to the main road or along our usual footpath so instead we headed for the industrial estate where the old railway used to be, as there wouldn’t be any cars around because it was the weekend. I soon curbed my desire to go racing off after a couple of “Ah’s” from Whitevanwoman, and settled down into a steady trot and by the time we got to the warehouses at the end of the road, I had got it sussed. I had also learned that I’m not allowed to have a wee or mooch around in the hedgerow or ditches whilst I’m being a Sled Dog – maybe it’s because there aren’t any hedgerows or ditches in the Arctic where Huskies live.

We turned round and headed back up the hill towards Balamory and that’s when I realised that this Sled Dog business was a bit like hard work, but I braced my shoulders, pushed my head forward and threw myself into it with gusto. I was getting so into it that I got up quite a speed, even though it was uphill and I didn’t notice the speed hump in the road hidden under the snow, but the sledge survived ok, although Whitevanwoman had to rescue the cargo of bricks.

I was puffing and panting a bit (only a tiny weeny bit) after the uphill haul so Whitevanwoman walked me up and down the road on the flat for a while to cool down gradually and polish up my technique, and then when we got back to the white van in front of our kennel, she took my harness off me and then we had a good romp around in the snow with my football.

Whitevanwoman said that it is very unusual to have a Snowvember but I think we should have one every year because I always have good fun in the snow and it gives me a chance to practice my Sled Dog skills so that they are perfect by Christmas. You never know, perhaps Santa might need me if one of his reindeers gets poorly on Christmas Eve 😉